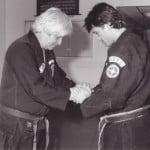 “I want you to always remember that Kenpo will always be the art of perpetual change… If you remember this then the art will never become obsolete.” … “The ignorant refuse to study and the intelligent never stop.” — Supreme Grand Master Ed Parker

That is one of Supreme Grand Master Ed Parker’s last quotes. He was inspired decades ago to examine his Kung Fu critically and insightfully to create American Kenpo as we know it today. Clearly, his desire was that we should resist the temptation to immortalize his art by leaving it to stagnate. The essence of the art of Kenpo is change and evolution. In this spirit, therefore, we are compelled to respond to the challenge of moving the art of Kenpo to the next level, and that is the Kenpo 5.0 system.

This system is one of perpetual change, not for the sake of change alone, but rather change that propels the system forward at every salient point in time. The goal of the Kenpo 5.0 system is to remain on the cutting edge of martial arts and lead the world of self-defense. In 1991 the Gracie family brought their system of Brazilian Jiu-Jitsu to the United States and thus began the elimination of the impractical martial arts. By default, the challenge and importance of evolving this art of Kenpo was born. This reality became overwhelmingly obvious in a very short period of time. So, for both self-serving reasons, and to address the common good of the art, we took on the challenge and created the Kenpo 5.0 system. The 5.0 Fighter competition events necessarily and quickly followed. Others have attempted to address this issue in the past and have chosen to partner with Jiu-Jitsu in various degrees. The challenge is to maintain the essence of the principles and concepts of Kenpo balanced with the addition of the principles and concepts of Jiu-Jitsu. That balance has not been successfully achieved until the introduction of Kenpo 5.0. This is truly a ground system of, for, and by Kenpo practitioners.

In creating new Kenpo techniques to enable the practitioner to accommodate the idea of defending themselves on the ground we had to learn the essential nature of how that world works. We had to understand how a ground fighter would likely move once on the ground. Only at that juncture could we begin to create Kenpo defenses from those positions. Once that was determined then the arduous task of taking that mountain of information and figuring out how to place that seamlessly into the Kenpo world began. It was my desire to work within the well-tested system of Kenpo and to use common sense techniques to expand the knowledge base of the student. This had to be done within the framework of self-defense techniques that placed the practitioner in positions necessary to utilize these skills, as well as create a new structure that allowed the increase of the retention and recall abilities more concurrent with known human learning and memory. That thinking gave rise to the reorganization of the technique syllabus now called “combat models”.

Restructuring the entire Kenpo system to fit this thinking was an enormous task but one that seemed obvious if we wanted to achieve a competency level that would allow the practitioner to problem solve in the midst of a shifting combative situation. Subsequently, certain techniques had to be eliminated, not to make room, but to remove conflicting information that would decrease the probability of making the correct choice under the new combat paradigm we now experience. Decisions were made that brought us to the threshold of accomplishing this goal, with the certainty that there would be updates that would be necessary in keeping with Supreme Grand Master Ed Parker’s vision. There was controversy, to be sure, but no one else was ready to take on the task. The result of this re-examination is an attempt at an evolved Kenpo system that if properly instructed will put the practitioner in the enviable position of feeling equally comfortable on the ground or standing up.

As a group, we continue to study and train and cross train to continue to hone our skills and expand our knowledge. The goal, of course, is to continue to evolve the system in the years to come. In the early days of the roll out of the Kenpo 5.0 system (2004) some who were practitioners of the art and students of SGM Ed Parker were very opposed to this sweeping and admittedly controversial change. And, of course, the slings and arrows of outrageous criticism began from the card carrying members of the religion of the insecure. This was easily overcome by the guidance and support of the seniors of the art whom I was close to during that transition. I remain close to them to this day. Ironically, having dealt with the negativity from the time “The Perfect Weapon” was released through today, I am reminded of one of my favorite sayings:

“I don’t know the key to success, but the key to failure is trying to please everyone.” Now so many years later the difficulties of our labor have given way to the proliferation of the common good that can be shared by participating in the system even if only by competing in the 5.0 Fighter events. If you find value in the idea that Kenpo is the preeminent system of self-defense in the street then it is incumbent upon you to address the concept of doing your Kenpo on the ground. Consequently, if you claim to have an understanding of who Ed Parker was, and therefore a concurrent understanding of the art of Kenpo, then the Parker quotes at the beginning of this article will lead you to the inescapable conclusion that something had to be done to address this issue.

It is with the best of intention that I dedicate myself to achieving this end with the help and support of my Kenpo 5.0 family. Know that you are welcome to participate in any way as long as it is with a good spirit and an open mind. Please take the time to look at the system and reach out to our Kenpo 5.0 family that is now present in 15 countries.

“I hold that the meaningfulness of life can be measured in one’s accomplishments to the common good.” This is the spirit and intent we adhere to, and now on the other side of cancer, I can say without hesitation that the road ahead is clear and our commitment resolute and undeterred by anyone or anything. It is the love and connection of our Kenpo 5.0 family that drives me, and will continue to do so for all my remaining days on this earth. To this end I dedicate myself.